throwback thursday: featured in sofi magazine, glottman discusses his concept for designing a home from a young family from marbella, spain. read the full text below. 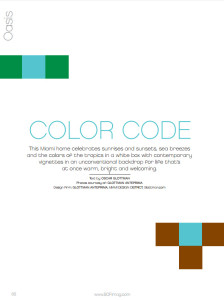 For a young family from Marbella, Spain, the dream of living in Miami became a reality with the purchase of an apartment between two horizon lines. Overlooking Coconut Grove Harbor to the east, and downtown Coral Gables to the west, the family sponsored a project that celebrates the light of sunrise and sunset, the breezes blowing at a perfect height above the sea, and the colors of the tropic in a white box with contemporary vignettes. New concepts were welcome realities because it was home away from home.

Flowing fabrics, diffused light, color, and interplay of textures make the stage-set for family-life. There is no art because the interior is an artistic statement in itself. It is executed as an eclectic mélange of the newest trends in furniture and lighting design with notes of minimalism, 60’s retro, street-wise culture, organic and plastic materiality, and some figurative manifestations. The results are unexpected: an unconventional backdrop for life that is warm and bright. 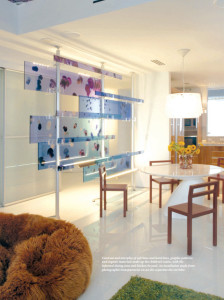 The project was designed by Oscar Glottman, architect, and produced with product and materials exclusively developed or imported by his studio, Glottman Anteprima, in the Miami Design District [now located at 219 nw 26th street, wynwood, fl].

Traditional swing doors were eliminated and replaced with sliding panels and flowing sheer curtains; allowing for different levels of privacy at will. Carpeting was installed on the walls and framed by a line of light that wrapped from wall to ceiling.

An eclectic mélange of minimalist lighting, retro wall-coverings with patterns revived from the 1,960’s, street-wise graffiti, resin blocks with organic patterns,a palette of very sophisticated materials and furniture elements (mostly imported from Europe), set in unexpected combinations resulting in an unconventional backdrop for life that is surprisingly warm and bright. Carpeting material combined; and its place in a new city like Miami and the unique nature of the tropics. Because it was home away from home, experimentation, theatricality,and an optimistic embrace of new concepts

A white box with contemporary vignettes, in lighting, texture, concepts of lifestyle, privacy, and comfort were challenged.

About the Grovenor House Condominium in Coconut Grove Miami:The Grovenor House, a 32-story luxury condominium with 151 residences near local restaurant and raw bar Monty’s on Bayshore Drive, began sales in June. By mid-July three-fourths of the building had sold–at prices averaging $450 per square foot. “I got taken by surprise by the sales,” Grovenor developer Ugo Colombo says.

“My plan was to sell the building as it was built.” Colombo was in the sales office one Saturday morning and was shocked when they sold $5 million in condos in 45 minutes. “I think there is a demand for large units in the Coconut Grove and Coral Gables area,” Colombo says. “There is no luxury building in that area.” While this building has sold faster than Colombo’s projects in the Brickell area, he says there is little likelihood that he will do another project in the Grove. He does not see any other waterfront property that can still be developed.

As it was, developing the Grovenor House site required several compromises with Coconut Grove residents, including the relocation of a historic 100-year old, 300-ton oak tree and several other trees to the back of the property.